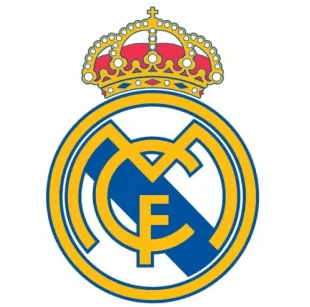 The team has traditionally worn their white home kit since the club´s inception. The Spanish king, King Alfonso XIII in 1920 added the word Real in the name as well as the royal crown in the emblem.

The first crest of the club from 1902 had a very simple design which included only three interlacing initials of the club, “MCF” for Madrid Club de Fútbol. The first change was made in 1908 when the letters received a more streamlined form and were placed inside a circle. As it was previously mentioned the next change came when King Alfonso XIII granted the club his royal patronage. The crown was added to the crest and the word Real in the name of the club.

However, after the dissolution of the monarchy in 1931, the royal symbols and name were eliminated. The new design of the crest without the crown inluded the dark mulberry band of the Region of Castile. Nevertheless, two years after the end of the Civil War, in 1941 the crest regained its “Real Corona,” or “Royal Crown” while keeping the mulberry stripe of Castile at the same.

The club has been playing their home matches at the Santiago Bernabéu Stadium since 1947. This amazing football venue has the capacity of stunning 85,454 seats in downtown Madrid. Just like their greatest rival Barcelona, Real Madrid throughout its history was owned and operated by its supporters and members called socios.

Today, Biancos or The Whites are lead by manager Zinedine Zidane who was playing for Real during the era of popular Los Galácticos alongside football stars such as Ronaldo, David Beckham, Raul, Roberto Carlos and Luis Figo.

Nevertheless, Real Madrid still has some of the best football players in the world such as Cristiano Ronaldo, Garth Bale, James Rodriguez, Karim Benzema and others. For that reason, Real attracts a great number of sports fans wherever they go. Today, Real Madrid has the fourth-highest average attendance of the clubs in Europe behind Borussia Dortmund, Barcelona and Manchester United.

The chairman of the club is Florentino Pérez who came for his second term after he resigned in 2006 and left the destiny of Real Madrid in the hands of successful Ramón Calderón until 2009.

Furthermore, the club is one of the most popular and widely supported teams in the world. Along with Barcelona, an Athletic Bilbao, Real Madrid is one of three founding members of the Spanish Primera División which have never been relegated from the top division.

The club has many long-standing rivalries, but most notable ones are certainly El Clásico with Barcelona and the El Derbi madrileño with Atlético Madrid. Their greatest European rival is German Bayern Munich with 22 duels, besides their Spanish rival Barcelona. Both teams have five titles of Champions League, while Real has 11.

During the period of the 1950’s, Real Madrid established itself as a major strength of both Spanish and European football. This was proven by the five consecutive wins in the European Cup and also their ability to reach the final seven times. This success was replicated in the league, where the club won five times in the space of seven years. Real´s team at the time consisted the greatest players such as Ferenc Puskás, Alfredo Di Stéfano, Francisco Gento, Raymond Kopa, and José Santamaría. According to some sports experts, this team is considered to be the greatest team of all time.

In Spanish football, Real Madrid has a record when it comes to La Liga titles. They have 32 titles, as well as 19 trophies from Copa del Rey, nine from Supercopa de España, as well as a Copa Eva Duarte, and a Copa de la Liga. At the same time, in international football, the club has a record number of 11 wins in European Cup/UEFA Champions League titles. Furthermore, Real holds a joint record of three Intercontinental Cups. They also have two UEFA Cups, three UEFA Super Cups, as well as two FIFA Club World Cups.

The club was recognized by the major world football association as the FIFA Club of the 20th Century in December 2000. Real was also named the Best European Club of the 20th Century by the IFFHS in May 2010. In addition, the club also received the FIFA Centennial Order of Merit in 2004. According to the latest IFFHS Club World Ranking, the club is ranked first with a new ranking points record. Besides, Real Madrid is also in the lead in the current UEFA club rankings.