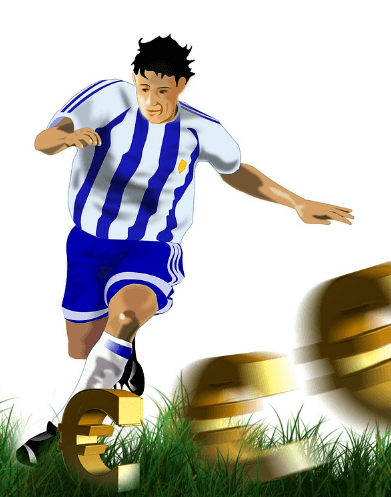 Sports around the world attract great amounts of money as well as some of the most popular and wealthiest sponsorships. Nevertheless, European football seems the greatest market because of the tradition and extreme popularity which this sport has in European countries. Therefore, it is not strange that the majority of highest paid footballers play in Europe. On the other hand, there are some leagues like American and Canadian Major League Soccer and Chinese Super League which try to compete in the market and lure the players into their clubs.

Spanish La Liga is certainly the most competitive football league currently. This league has some of the highest paid soccer players in the world, and for a long time these players in Spain received the highest salary for their outstanding performances. For a long time, Messi and Ronaldo were considered as the World’s Highest Paid Players in Football. However, the interest for football in other countries, as well as the fast-changing football scene made the Chinese Super League to aggressively involve in this sport offering huge amounts to the players and their current clubs to attract some of the best football players.

At the same time, it is already known that the largest sums of money are spinning around some of the best players both in Spain and in the world. Therefore, it is not a surprise that the highest paid football player in Spain is none other than Cristiano Ronaldo from Real Madrid. Ronaldo per week receives £365,000 or around $450,000. His transfer from Manchester United to Real Madrid at the time was the record amount of £80 million which implied the high salary from the beginning. Furthermore, his great results and success on the pitch have made it sort of justified, since this 32-year-old star is the main character in both Real Madrid and Portuguese national team.
The next player on the list is also from Real Madrid, and his transfer also broke the record in 2012 when he arrived from Tottenham Hotspur for €100 million. Gareth Bale is the second highest player football player in Spain with £350,000 per week. This 27-year-old Welsh player is a co-star in Real, who on several occasions showed his discontent with the current salary. Bale claims that he should be paid as much as Ronaldo and he supports it with the fact that he is a significant element in the gameplay.

The best Barcelona´s player and also according to some the best player in the world is the third highest paid player in Spain and fifth highest paid in the world. Lionel Messi´s weekly salary is £336,000. 29-year-old Argentinean is under the club´s protection since the early age. Therefore, he is grateful for the possibility which the club and its school offered, their help and all the money which Barcelona invested in him as a player as well as his health.

The next two players are also Barcelona´s main hopes. Neymar and Luis Suarez both get the salary of £275,000 per week which is significantly less than the leading star in the Camp Nou Stadium. Currently, in the world, higher salary receive both Paul Pogba in Manchester United and Graziano Pelle in Shandong Luneng Taishan. Both players receive £290,000.

However, the list of footballers with highest salaries in Spain goes back to the player of Real Madrid. Toni Kroos weekly earns £156,000 which is still an impressive amount of money. However, it seems insignificant comparing to the sum which Cristiano Ronaldo or Lionel Messi get. He is followed by Andres Iniesta from Barcelona who earns £6,000 less and his team mate Sergio Ramos who earns £16,000 less.

We all know about the policy of Barcelona and Real Madrid which makes us certain that the majority of highest paid football players in Spain come from either one club or the other. At the same time, we are uncertain what is the highest paid football player in Spain who does not play for Barcelona or Real. Regardless of the fact who this player is and what club he plays for we are aware that it is significantly lower in comparison with the highest paid players.

Furthermore, it is important to point out that these salaries are going up every year. Even though the list of highest paid soccer players in Spain did not change significantly, the lists of the highest earning footballers in Europe and the world were a lot different, primarily because Real´s and Barcelona´s players were highest paid in the world at the time. This leaves a lot to discuss whether these sums are justified or not. At the same time, we are probably unaware of the possible future scenarios and other leagues such as Chinese Super League which have the interest to get the best players in the world at all costs.